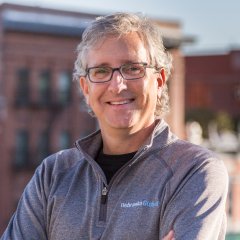 Doug Durham is the CEO of Don’t Panic Labs, which helps companies innovate through the design and development of software technologies. He is also the co-founder of Nebraska Global, DPL’s parent company, known as a pioneer in the startup landscape in Nebraska.

Doug has over 30 years of software engineering and development experience in aerospace and defense, healthcare, manufacturing, ecommerce, consumer web applications, and internet network services. He is passionate about the process of solving problems through software, and the application of sound engineering principles and patterns to these efforts.

His diverse skills, education, and various leadership roles have shaped his career. Doug served as a Civil Engineer in the Air National Guard for 21 years, which deployed him to many strange and wonderful places around the world, before he retired at the rank of Major.

Doug is a proud Husker and has an Electrical Engineering degree from the University of Nebraska-Lincoln, where two of his three children are also pursuing engineering degrees. He has taught at the UNL Raikes School of Computer Science, and serves on a College of Engineering advisory board. He also has a master’s degree in Finance and Management.

A native Nebraskan, Doug and his wife Shana both love living in Lincoln.